It occurred to me recently that adding a trim router (otherwise known as a Laminate Trimmer) to my stable of shop tools could pay big dividends when it comes to time-saving. There are many smaller operations where even my smaller 1 ½ HP models are too large to be safe or practical and I generally have to switch to hand tools to get the job done. Originally developed to trim laminate for counter top installations, these little routers have come into their own and have become to tool of choice, not only their intended purpose of laminate trimming but also for any of the smaller jobs where a traditional router would be impractical. Such tasks as inletting for hinges, cutting small dovetails, edge-forming and even small mortise and tenon construction are right up these tool’s alley. Think of a laminate trimmer as a fully functional “mini-router” that is perfectly suited to jobs where the utmost in control and cut visibility are required. 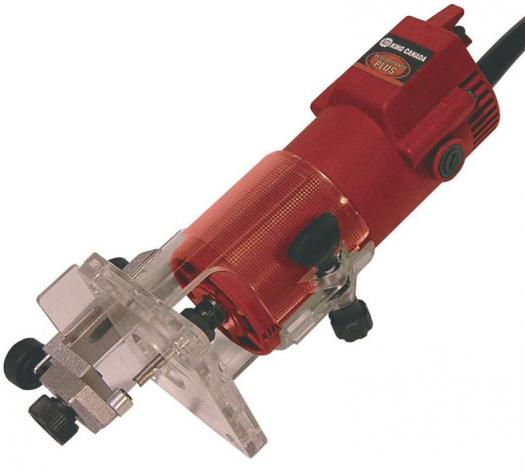 In selecting a trim router, I researched some of the more popular models available at all price points. Below I’ll give you an idea of what’s available and how each model’s specs and features stack up against the competition.

While a laminate trimmer will never be able to replace my hand tools or offer the functionality of a full-size router, it definitely fills a gap and complements both. I’d recommend checking out the wide variety of trim routers available and consider adding one to your shop arsenal … I’m certainly glad I did.

Priced at the lower end of the spectrum, the King features some nice additions, such a straight edge an integral roller guide, features that are generally only found on higher-end models. While not the most powerful of the group, with its 3.3 amp motor and a no-load speed of 26,000 RPM, the 8362 should have sufficient power for most light routing jobs at a price point that is rea­sonable for the occasional user. 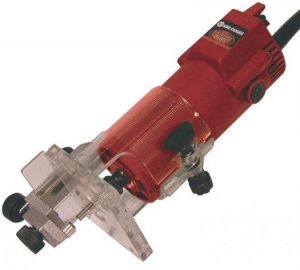 The base model of the P/C line, this trimmer is one of the more pow­erful routers on the market at 5.6 amps and 30,000 RPM, but this little trimmer has more than just brawn. The cast aluminum base allows for excellent cut visibility and decent adjustment, and the unit’s sealed bearings should help ensure hundreds of hours of trouble-free operation. 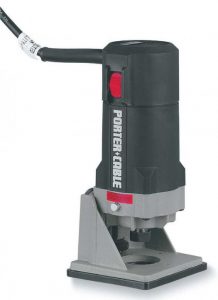 I need optimum visibility when doing detail such as inlays, and with its transparent plastic base, the 3709 makes seeing your cut easy. There is a wide adjustment range in the rack and pinion depth control and the addition of a thumb wheel makes fine adjustment a breeze. The router also comes with a full line of accessories including a full set of guides and a straight bit. At 4 amps and 30,000 RPM, the Makita is in the mid-range of the pack, power-wise, but the combination of outstanding cut visibility and light weight makes this trimmer a real contender, especially for inlay work. 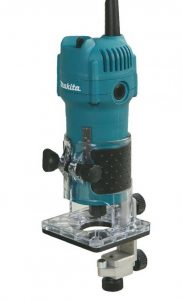 Rigid tends to include a lot of “extras” in their tools while maintaining a reasonable price, and this router is no exception. Featuring a beefy 6A motor with user replaceable brushes, the R2401 also features variable speed, which is a big help when deal­ing with materials such as cherry that tend to burn with high bit speeds. An electronic feedback circuit keeps the router’s speed constant under load, and the included guides and bit mean you can start routing as soon as you open the case. The addition of an LED light and a second base to this years model only makes this tool more user friendly. Priced right at the top of the mar­ket, Festool refers to the MFK700 as a “Modular Trim Router,” and a quick look at the specs and available acces­sories explains why. The Festool has the unique ability to change base configura­tions to suit a wide variety of operations and do it all without tools. The MFK 700 can route in the traditional vertical ori­entation and then be switched over to a horizontal router setup in seconds. The 6A variable speed motor makes enough power for virtually any task and the inte­grated temperature monitoring ensures your investment is protected during periods of heavy use. Add the 1/10 mm depth micro-adjust and it becomes even more clear that this tool isn’t your aver­age laminate trimmer. As with all Festool products, dust collection was obviously a priority when they designed this tool, and the MFK700 does it very well. If budget is not a concern but dust collec­tion and multi-function flexibility are a priority, you really can’t go wrong with this router. 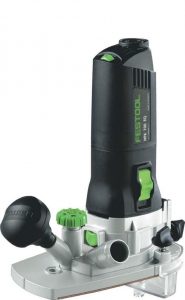 Another variable speed trim router, this router’s balance and ergo­nomics make it stand out from the crowd. Bosch included some nice touches with this trimmer, includ­ing “finger pockets” in the base for added control while per­forming precision cuts. The soft-start 5.6A motor will hit 35,000 RPM and will spin bits up to a large 1 5/16″ in diameter while using Bosch’s Constant Response™ Circuitry to keep the bit speed con­stant under load. Another nice touch is the ability to use the two included wrenches for bit changes or select to use the integral spindle lock rather than being limited to one system or the other. When he’s not out enjoying the woods and water surrounding his home, you will likely find Ryan Shervill in his Penetanguishene, ON workshop building custom furniture for clients throughout North America.