Shaping the future of routing technology

I’ve been using a CNC in my shop for some time now. Before getting a chance to use the Shaper Origin, I noticed it online so I was very interested to get one in my hands and see what it was all about. For this review I initially thought I would compare the Origin to a CNC to explain it. As I started play­ing with it, I thought maybe I would need to compare it with a conventional router to explain it. But I think neither of these comparisons would do justice to the tool. I will explain how the Origin is like both a CNC and a hand-held router, but I believe it is a class of tool on its own. It does have some unique features and benefits and, of course, there are some limitations that we will also look at. 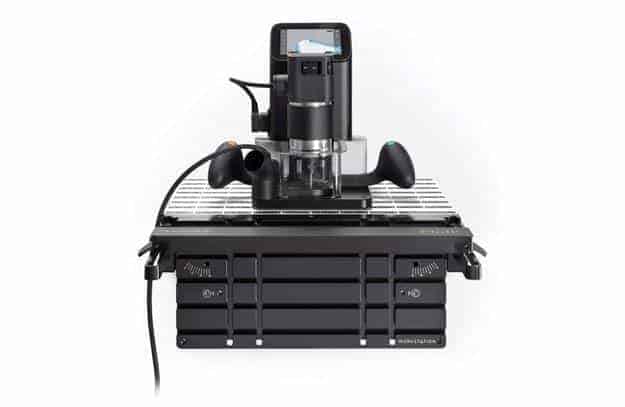 Shaper Origin is a hybrid CNC/hand-held router. Its size, shape and weight are similar to a hefty 3-1/4 HP plunge router, so it has a famil­iar feel in the hand. However, it has some extras you won’t see on a regular hand-held router. For one thing, Origin has a screen mounted to the top. Origin is powered by a 1HP motor with a 1/4″ collet. The motor can be moved in a limited range of motion by the onboard computer. There is about 1″ of movement in the motor. The on-board screen allows the user to see and control this motion. Origin is able to follow a computer drawing within this range of motion much like a large CNC would move around a 4×8 sheet of plywood to cut out a kitchen cabinet. Origin is able to read line art drawings transferred to it either by WiFi or by a USB drive. Origin also has some onboard design capabilities to create a simple design right on the router.

So far, the benefit of this might not be readily apparent, but let me explain this better with a practical scenario where you could use Origin. Unlike a large CNC, which is completely self pro­pelled, Origin works in harmony with the user to rout a design. So, while Origin’s self-movement is around 1″, it’s not limited to rout­ing things only 1″ in size. If I wanted to make a bookcase and dado the shelves into the sides with a conventional router, I would need to use a straight edge. If I drew a line on my material, it would be impossible to follow freehand. However, if I did not care about the quality of my work, I could probably follow the line within, say, 3/8″ or maybe 1/4″ and rout the dado a bit wide and make everything work. It would save the time of setting up an edge guide. Obviously, no one would do this. But what if I had a router that could compen­sate for me being 1/4″ off the line on one side or the other? This is exactly what Origin does. I provide the large motion, close to where the router needs to go, and the onboard computer brings the router bit exactly along the line I want to cut. I can also choose if I want to cut centered on top of a line, or along the left or right side of a line. The big advantage to Origin is that it can take away making patterns, templates, lines and jigs for anything I would typically rout with a hand-held router. It can save time routing complex “one offs” that would otherwise require a special jig or template to be made.

How does it work? Origin uses “shaper tape” placed in rows over the work surface to provide information to a small onboard camera. This tape is just a lightweight tape with random Dominos printed on it. There is no real science or specific placement required for the tape. Stick some rows down 6″ to 8″ apart and this allows the onboard camera to figure out how far and in what direction Origin is moving. Origin can also reference from the edges of a board and measure layout positions. Going back to my shelf dado example, I would not lay out a project like this on the work surface. Instead, I would quickly lay out lines on the onboard computer screen, ref­erencing from one end of the work. I am able to rout duplicate pieces this way, also, so the second, third, fourth, etc. piece will be routed exactly as the first. Origin will show me the layout lines on the screen, along with a “target circle”. The target circle represents Origin’s range of motion. As long as I keep the target circle at least partly over the layout line, Origin will do the rest to rout a perfect dado. Of course, Origin is not limited to dadoes. It can take any 1/4″ shank router bit, so it’s only limited by your imagination. It can be used to cut out intricate shapes from sheet goods, cut inlays, dadoes, letters for signs, and all sorts of other things that would be impossible to do completely freehand.

Origin really opens up new possibilities in the shop. One of the big advantages of Origin is that there is no size limit to the workpiece. Origin is ideal for large workpieces that would not be able to be cut on a CNC. Some of Origin’s online literature shows a large, intricate inlay being installed in a hardwood floor. Origin could also be used just as well on other large surfaces, or on an assembled project where it would be impossible to put the project on a CNC. Origin is also self-contained, so there is no add-on software to buy as there is with a conventional CNC. And it’s also very simple to learn. I was able to pull Origin out of the box and carve some simple text in a test piece in about 15 minutes without having used the tool before.

For all its advantages, Origin will not replace a CNC or a hand-held router. While Origin can do a lot, it still isn’t the only router a shop would ever want. But to be fair, I don’t believe the design­ers would suggest that. Origin does have its limits. It’s not the tool to reach for if you want a simple round-over on an edge; a con­ventional router will be quicker for that. At 1HP, Origin has a smaller HP than a lot of hand-held routers. It’s designed for detail work, not heavy material removal. Origin also has to be oper­ated by someone, so unlike a CNC where I can start a project and walk away, I have to guide Origin close to where it needs to be to cut my project. Usually when I run something on my CNC, I start the machine and then do other tasks while it works away, so I feel like this makes me more efficient. Origin is also not able to do 3D carvings like a conventional CNC can. I don’t think I would be dis­suaded from buying Origin for these reasons, though. I believe it’s a question of application rather than points of limitation. Origin is available at a price that is competitive with even a small CNC, yet has no limit to the size of workpiece it can be used on.