This machine looks super cool. With its unique method of controlling and moving a router, it’s impossible not to notice it right away. But this means nothing if the PantoRouter doesn’t work well, help woodworkers produce quality joinery and maybe even add to their experience, too. I was keen to learn if the cool factor was all there was, or if this would be a machine that could help woodworkers of all stripes improve their woodworking. 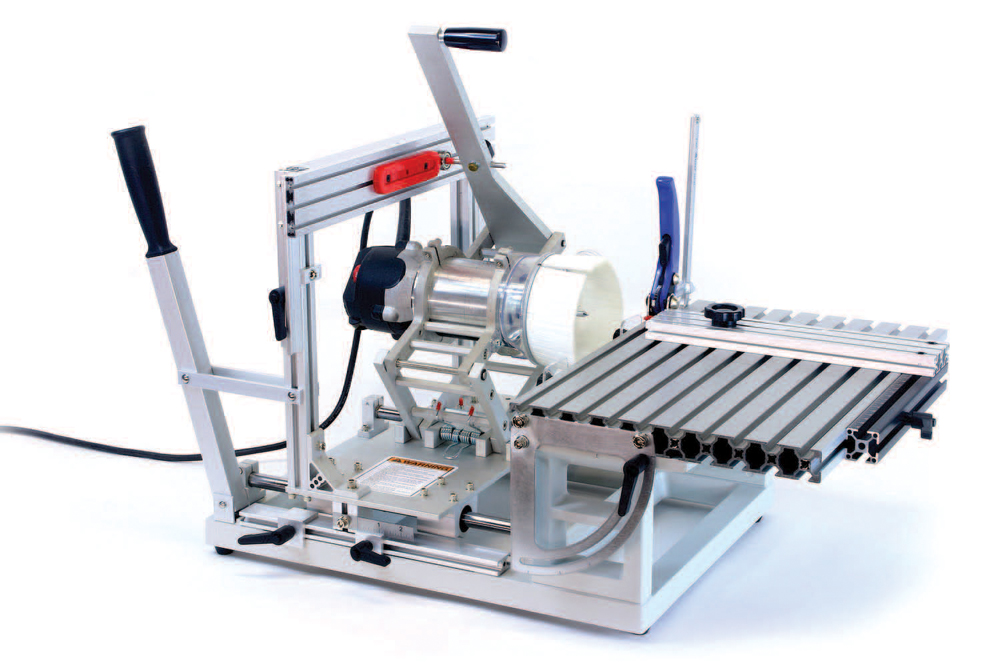 From the moment I started to unpack my PantoRouter I knew it was a well-made piece of machinery. It was packaged very care­fully so nothing would get damaged during shipping. And this initial thought was only solidified as I continued to assemble the PantoRouter.

Assembling and fine-tuning took about 90 minutes, but it was surprisingly enjoyable to work with such accurately machined parts that fit together with such precision. The manual was also clear and helpful. As you can imagine, a machine with many moving parts, and one that works with such accuracy, needs to be set up prop­erly in order to work well. Thankfully, it wasn’t overly complex to accomplish that task. The router bits included with the package were also of high quality, and I’m sure they will last a long time. Even the hold-down clamps that accompanied the machine worked smoothly and are a joy to use.

This is a well-made machine, but to me that was just the icing on the cake. I still needed to know if there was even a cake to ice. The machine is operated by using one hand to move a lever in and out to control the depth of cut. The user’s other hand operates the PantoGraph arm, causing the router to move left and right, and up and down. The bearing on the PantoGraph arm runs on the inside (to create the female portion of the joint) and outside (to create the male portion) of the template.

I started with a simple mortise and tenon joint in 7/8″ wide stock to simulate making a standard cabinet door or face frame. Once again, the manual was clear and helpful, even though there’s a lot for a beginner to consider. Using different templates, bearings and bits to create accurate joinery is what the PantoRouter is all about. Different combinations do different things, so the user needs to familiarize themselves with the options. I didn’t realize this at first, and quickly created a beautiful 1/4″ thick tenon for my 1/2″ wide mortise. The joint looked great, but obviously didn’t work so well. I’m not usually a guy who reaches for the manual, but I quickly realized I needed to. After 30 seconds of reading, I knew where I went wrong. Like most machines, it’s simple to use once you know how. My next test M+T went much smoother, producing a joint that would stand the test of time.

The PantoRouter is capable of machining more than just stan­dard mortise and tenon joints, though. You can also create double, triple, angled and compound angled mortise and tenons on vir­tually any workpiece. Next, you can jump into box joints, dowel joints, and both fixed and variable spaced dovetail joints. Finally, the option to create custom-shaped joints will allow you lots of flexibility for unique situations. I tested the PantoRouter Pro-Pack, which has everything you’d even need. Their PantoRouter Basic is meant for a workshop where the machine will be set up for a single operation, and left that way. It’s about $750 less.
The bottom line is this: The PantoRouter has the potential to be a highly versatile joinery machine in any shop. It’s got loads of flex­ibility, is very accurate and is made with quality in mind. You can’t really think of this machine as just one machine, as it can do so many things. If you take the time to learn the ins and outs of this versatile system, you’ll be rewarded with great joinery and, in turn, strong, beautiful and lasting furniture.

Rob is a studio furniture maker and the editor at Canadian Woodworking & Home Improvement.